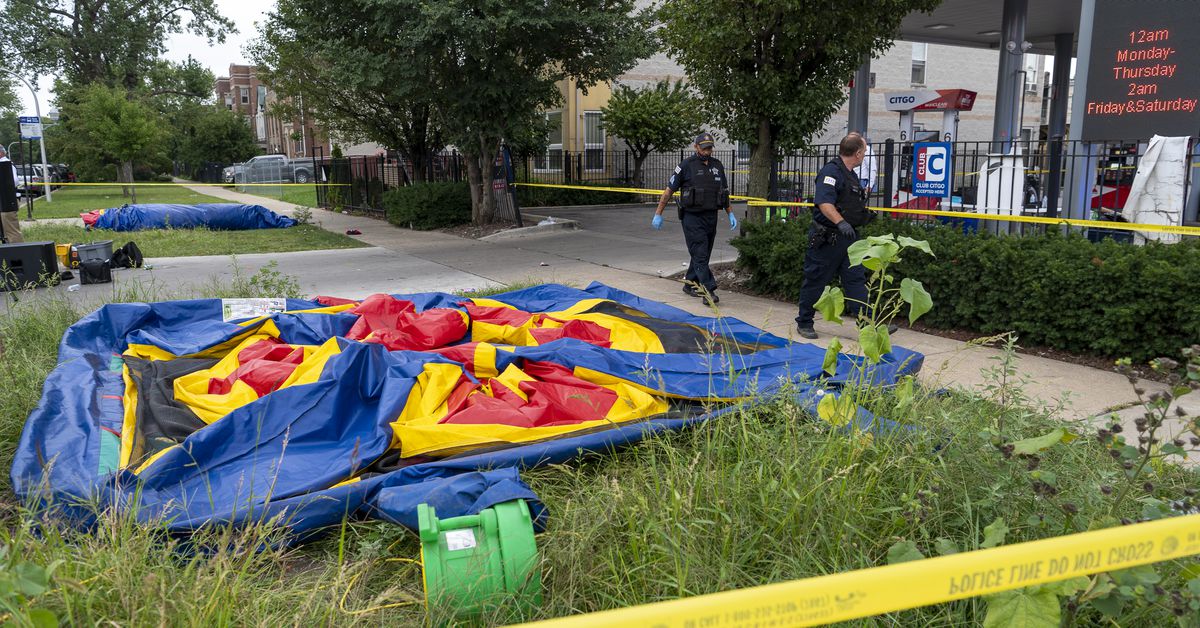 Chicago has already seen more murders and shootings this year than all of 2019. Violence is increasing in most of the city’s targeted neighborhoods.

It had to be a happy day at East Garfield Park, a back-to-school event for kids who live in one of Chicago’s deadliest neighborhoods.

Organizers handed out backpacks, popcorn and cotton candy as the kids jumped into bouncy houses and danced to local rappers on a sunny Saturday afternoon.

As things were wrapping up, a red car drove by and the small gathering of families was sprayed with bullets. Children and parents tripped over each as they ran for safety. An 11-year-old boy, his 14-year-old sister-in-law and one of the rappers were affected.

“They just started shooting and there was just a whole bunch of bullets,” said Ayonna Fleming Peterson, 14. “I knew I had been shot in the ankle and the first thing I did was panic, I looked around looking for my brother, then I noticed that I had also been shot in the leg.”

Lamar Peterson said his children were recovering, but that did not alleviate his anger. “They are all traumatized,” he said. “We were just there to spread some love in the community.”

The attack was part of the Labor Day weekend violence that punctuated the end of summer in a year that has already seen more shootings than all of 2019.

At least 67 people were shot dead during the long vacation, including eight children. One of them, a 4-year-old boy named Mychal Moultry Jr., was killed when bullets went through a window and hit him in the head as he was braiding his hair.

The worst recent year for gun violence in Chicago was 2016, when there were over 4,300 gunshot victims and over 762 murders – the highest death toll since the mid-1990s.

This year has been particularly deadly for children 15 and under. The Sun-Times reported in early summer that children were dying from gun violence at a rate three times the rate last year.

The pace continued throughout the summer, according to a Sun-Times analysis. At least 16 children aged 15 and under – 11 boys and five girls – were shot dead.

Data from the Sun-Times also shows that the city’s efforts to reduce gun violence in the deadliest neighborhoods have failed.

According to a Sun-Times analysis, only five of the 15 targeted communities on the west and south sides experienced fewer homicides than at the same time last year, and only three had fewer shootings.

Over the holiday weekend, Mayor Lori Lightfoot promised a new initiative against gang violence but did not reveal any details. However, she promised “that there shouldn’t be any gang member in Chicago who gets a comfortable night’s sleep.”

Peterson said his intentions on Saturday were to do good and maybe keep the kids out of harm’s way. He organized at least four backpack giveaways this year in neighborhoods on the south and west sides.

“I was there strictly to bring joy to the community,” said Peterson, who was also the event’s DJ.

The event ran from noon to 3 p.m. Saturday in the parking lot of a gas station in the 2900 block of West Fulton. Peterson said it was going so well that rapper VT Badboy ‘decided to stick around for the kids.

The armed men in the red car passed about half an hour later.

“It’s gone from kids jumping with popcorn and moms taking pictures of their kids to fully automatic guns fired,” Peterson said. “The kids were running and they tripped over each other and the parents were crawling over the kids – everyone was just running, screaming.”

Peterson’s daughter and stepson were sitting on a go-kart when she was shot in the calf and ankle and suffered a scraped hip.

“I was handing out popcorn and cotton candy and we started cleaning up and I sat in the kart,” Ayonna said. “I got to the car. “Daddy I got shot, Daddy I got shot. I jumped in the car, my two brothers got in the car and we rushed to the hospital.

Both children were treated at Rush University Medical Center and have since been released. “I’m a little better, there are times my leg hurts,” Ayonna said.

Less than an hour before the shoot, the rapper posted a video on his Facebook page of him jumping into a bouncy house with a group of kids. The caption read: “What I do it for.”