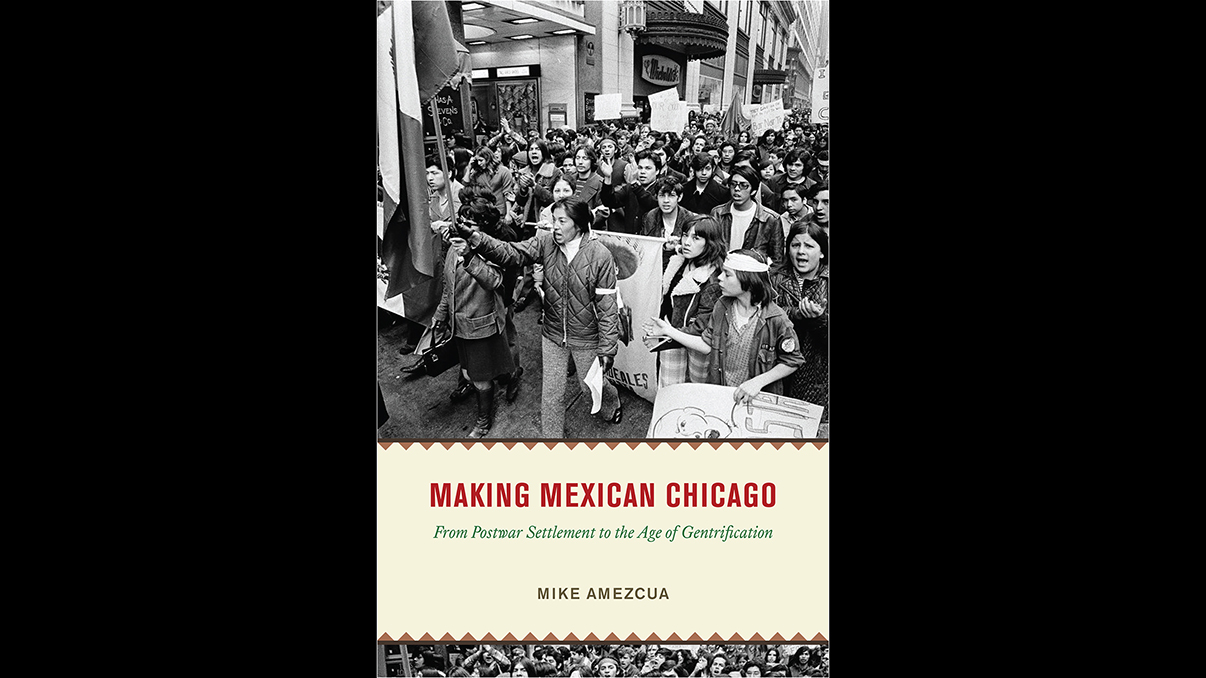 The arch over 26th Street lets anyone passing by know they are entering a largely Mexican enclave. But before it was renamed La Villita, it was a largely Czech neighborhood simply known as South Lawndale and this change in population was no accident.

Author Mike Amezcua, who is also a history professor at Georgetown University, says the story of Mexican migration to Chicago begins much like the migration stories of many other groups.

“The first immigrants from Mexico to Chicago came because of the kinds of industries that existed in the Midwest,” Amezcua said. “In Chicago specifically, such as the railroads and railroad system, the steel mills of South Chicago and the meatpacking and packing plants of Back of the Yards.”

“She got her real estate license in the 1950s and after being relocated she started thinking about how she could grow her business in communities like Pilsen and South Lawndale. These were communities that, although we often think of them as the Mecca of Mexican Chicago, weren’t very Mexican,” Amezcua said. “Anita started buying and selling property in these neighborhoods. Not only that, she also had the foresight to imagine what it would take to sell a house to a Mexican immigrant. And often that involved building the commercial thoroughfare of 18th and 26th Street in a way that would be hospitable and familiar to Mexican immigrants so they could shop, buy their pan dulce. And in this way, Anita shaped Pilsen, but more importantly, La Villita by opening up neighborhoods and properties to community representation.

In “Making Mexican Chicago: From Postwar Colonization to the Age of Gentrification”, Mike Amezcua explores how the Windy City became a Latin metropolis in the second half of the 20th century, delivering a powerful multiracial history of Chicago that sheds new light on the origins and persistence of urban inequality. The following excerpt details some of the ways that the city’s Latino civic leaders and neighborhood groups used grassroots methods to gain political power and community control during the 1970s and ‘80 years.

In October 1981, scholars, artists, and community residents gathered at UICC (University of Illinois at Chicago Circle) for a conference titled “Art, Architecture and the Urban Neighborhood.” Perry R. Duis, a professor of urban history, hailed the wave of community revolt that swept through Pilsen: “Instead of a plan imposed entirely from outside the community, [Benito Juárez High School] was designed with the help of the people of Pilsen. Duis remarked on how the residents realized their own aesthetic vision: “The sloping walls reflect Mexican architectural heritage, not aesthetic ideas imported from outside the neighborhood.” Moreover, “the school project is also significant because it bears witness to an approach to the serious question of urban redevelopment and the revitalization of neighborhoods”.

While Duis was talking about building a Latino empowerment architecture, the United Neighborhood Organization (UN) was gearing up to build another movement. Seeking to attack not just Pilsen, but other Latin American colonies, and the political and economic subjugation the very word implied, the community group launched a campaign to fight racial injustice and the infrastructure inequality. In the early 1980s, factory closures, overcrowded and underfunded schools, and deplorable housing conditions continued to grip Latino neighborhoods, while becoming the battlegrounds on which Latinos sought to build a neighborhood power. This new decade would be a time of significant grassroots political mobilization for Latinos themselves, driven by population growth, economic and structural neglect, and an inspired politics of self-determination.

When Richard J. Daley died in 1976, he left in place a political machine that could still control and undermine the growing political power of Latinos. City Hall continued its long tradition of redrawing district and ward boundaries to keep Latino supermajorities from showing up. But gerrymandering could not hide the fact that Latin American colonization was expanding in the wake of white depopulation. In the southwest and the bungalow belt, from 1970 to 1980, the population fell in most communities, except for Pilsen, which saw a slight increase, and Little Village, which saw an increase significantly from 62,895 in 1970 to 75,204 in 1980. Pilsen and Little Village were becoming denser during this decade, but Mexicans were also moving south of the river, hoping to turn formerly white neighborhoods into Mexican neighborhoods .

Meanwhile, the areas surrounding the Downtown Loop were also transforming. From the late 1970s through the 1990s, the gutting of the white tax base continued to guide city hall policy as developers, planners and bureaucrats pursued redevelopment projects to sell off valuable real estate. downtown, hoping to bring back commuters. In Pilsen, speculators of all persuasions, from lawyers to slum-mongers to former city bureaucrats, seized this moment to flip their properties and create their own “settlements” to attract “urban pioneers” and “ white farmers,” displacing the poor and working people. Class Latinos in the process. Community organizations saw it as a project of cultural erasure and pure and simple colonization.

Chicago’s redesign at the end of the 20th century had an economic rationale. In an era of factory closures and economic restructuring, the reshuffling of people in the metropolis could extract new value from old spaces. Now there was more land for sale thanks to white depopulation and the Community Reinvestment Act (CRA) of 1977, which banned conventional tools of segregation. Moving from white to brown or black neighborhoods, or even from black and brown to white, became an economy in its own right in the neoliberal era, when the post-industrial city shifted to dependence on privatized capital and non-state entities. A whole apparatus has formed around it, primarily through the CDC (Community Development Corporations) model, which competed in a marketplace for private (corporate, philanthropic, and foundation) and federal funds to improve, change, or save neighborhoods. Enterprise and Empowerment Zones were quickly added to the menu of economic development, providing tax incentives for urban space.

Latino civic leaders and neighborhood groups organized grassroots campaigns for political power and community control. In the political arena, Latino independents challenged the machine and helped build a racial coalition movement that in 1983 elected Harold Washington as the city’s first black mayor along with a wave of Latino challengers to the city council. But the new weight of colonization also revealed internal divisions. Machine Loyalists and Independents disagreed on postindustrial politics and how best to invest in and revitalize Latino neighborhoods. Some city leaders—and City Hall—saw ethnic tourism, urban travelers, and branding of Latino neighborhoods as a positive way to generate needed revenue; others saw it as an invitation to speculators who threatened the relocation of residents. Just as artistic settlers in East Pilsen struggled to live in a “slum,” as one artist put it, Mexican immigrants, Mexican Americans, and Latinos in general had to make sense of their new surroundings. in the ever-expanding far southwest. Throughout the 1980s and 1990s, working-class Latin American culture became dispersed, displaced, and suburban as residents shaped their bungalow landscapes and became post-industrial survivors.

As community groups faced federal austerity against urban America, privatized capital, bankers and strategists pushed for economic rationalization to redistribute people across the metropolis, sometimes even presenting the process as the end of segregation. But whether one was displaced by gentrification or living in a workers’ bungalow on the Far Southwest Side, what endured was the landscape of whiteness that continued to shape these spatial and economic movements. The real estate market had used Latino buffer communities for years to negotiate white ethnic fragility and hostility, based on anti-black racism and, at times, anti-brown racism or fear of immigrants from the Global South. Indeed, by the 1990s, the old color lines of the mid-twentieth century had softened somewhat, but lingering class and racial inequalities continued to resegregate people in metropolitan Chicago. The reversal of the colonias is both a story of erasure and renewal. Thus, a new colony of a different color settles in Pilsen.

These are the counties in the Chicago-Naperville-Elgin, IL-IN-WI metro area where COVID-19 is growing fastest