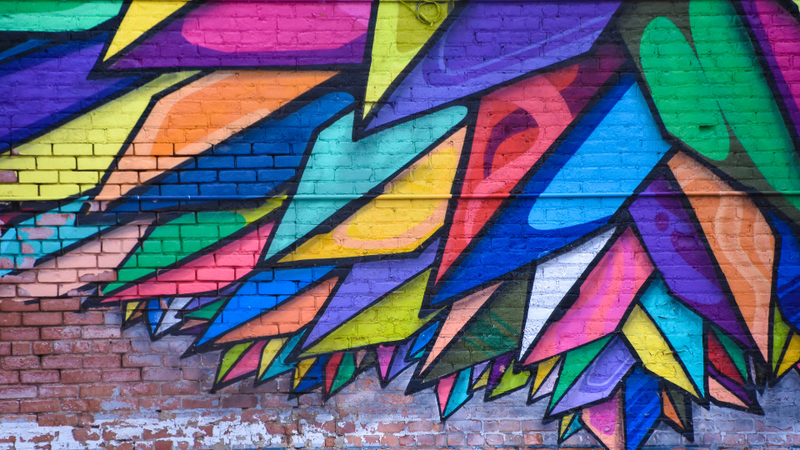 Murals exist in almost every culture around the world and have long been used by people and communities to communicate with each other. The oldest known example of wall painting is in South Africa and was drawn on a rock face 73,000 years ago. Later murals have been found in caves and on other structures. While we may not fully understand what all of these murals meant to their creators, we can see “that the artist used images purposefully to create a narrative for himself or others”.

Indigenous peoples of what is now North America were creating “public” paintings in the American South long before the arrival of Europeans and well into the 19th century. Muralism as we know it today began in the 15th century with artists like Michelangelo and Da Vinci. Artists were often commissioned to adorn castles, shrines, tombs, exhibitions, libraries, churches, and the homes of wealthy patrons, while retaining their original meaning and purpose: “to depict society through stories, value systems, fantasies and transformations”. ”

More recently, murals have become common in cities, where they are spread across streets and incorporated into architectural features. Whether you’re talking about street art type murals or more mainstream murals, the fascinating thing about murals is their use by people of all cultures, political affiliations, and backgrounds to communicate their needs, wants, and desires for very public way. . The locations of murals have always had significance in depicting community life and the history of communities. Murals have become a way for communities to document the shared history and culture of their residents.

Cultural geography is the study of the relationship between culture and place. GIS has long been used by geographers to understand and document this relationship and bring together various types of information to help researchers visualize demographic trends and other patterns that explain the world we live in. Many cities, large and small, in the United States have expanded on a long-standing practice of using GIS to capture information about assets (e.g. roads, fire hydrants, trees, etc.) .) and built interactive maps to highlight cultural amenities, including street art and murals.

In Washington, DC, several organizations and community groups have organized maps to showcase the extent of culture and community in the area.

MuralsDC was established in 2007 to replace and deter illegal graffiti by creating murals and thereby revitalize sites within communities in the District of Columbia. The project is a partnership between the District Public Works Department and the artist community in DC and across the United States. The project now has over 150 murals installed across the district’s eight neighborhoods and offers young artists the opportunity to gain experience in the art of spray painting. The online gallery and “walking tour” use Google Maps to help site visitors examine the murals virtually. The site needs updating, but still allows visitors to interact with the data and see the variety of murals that exist in the district.

Hola Cultura, an organization dedicated to celebrating the rich history of the Latinx community in DC, uses multimedia to connect Latinx and non-Latinx communities in the district. Hola Cultura has brought together Latinx arts, culture, and humanities in an online map showing when Latinx murals were painted and documenting which ones were destroyed, damaged, or no longer visible. The site, originally built on Mapstory.org, was moved to Esri’s ArcGIS Online when MapStory.org closed in 2017.

GIS has been used in and around the District of Columbia to document, visualize, and even gamify mural visits in the district. A geocacher named Exmachina has built a series of geocache locations in DC, all based on murals. Exmachina’s goal, according to a 2013 article in Greater Greater Washington, was to find murals that “…have a unique story…”, and those murals certainly have interesting and unique stories. Note: The geocache series is now archived, but many murals from the series are also listed in the MuralsDC project.

Why is location important?

Art and geography have always been linked. Monet loved Giverny and some of his most beloved paintings were painted and/or performed in Giverny. Antônio Carlos Jobim’s music is strongly influenced by his life in Brazil. Similarly, mural artists are often tied to their art by location. “In other words, art and geography have been implicated together in transforming the way we represent and conceptualize our world. Art is part of the practice of dwelling in and on the earth.

Cities that map local murals and other street art create data that can be used by the community to encourage tourism or manage public works. Cities and towns can benefit from mapping these cultural resources. Mapping art locations may not be a traditional way of thinking about producing geographic information, but it’s as much geographic information as any fire hydrant or office location of job.

A community that can identify its strengths and resources by inventorying tangible and intangible cultural assets is a desirable community. The City of Austin, Texas believes that “…culturally vibrant places are desirable and, in turn, valuable”, and that the creation of geographic information demonstrates this value. This hyper-focused approach to cultural and economic development may also be able to help communities survive the economic downturn, avoid neighborhood gentrification, and allow residents to control their own development.

Is revitalization or redevelopment the ultimate goal?

“Murals of Tucson: Cultural Legacy Through Contemporary Art,” acknowledges the online guide to the murals of Tucson, Arizona. With 25 entries in the online map, the app is a great resource for local residents and visitors to view murals by local artists. The map highlights local art, encouraging people to visit and invest in the community, but some people worry that at least some of the art meant to comment on redevelopment issues will have unintended consequences and actually brings more people to a community that doesn’t want that kind of change.

Gentrification and the potential for undesirable impacts of urban regeneration are valid concerns for communities. However, muralism is also about reclaiming space and helping communities create spaces that represent both the people of the community and the history and culture of the community. As communities are empowered to take control of their future and create art that represents them, geographers can support and describe community art by using GIS and other mapping technologies to document the locations of these paintings. murals and other cultural features in the landscape. This data can be used to map patterns of regeneration and redevelopment that add value to conversations about space, place and community.