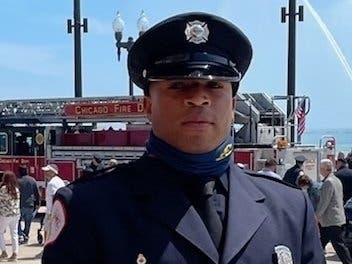 CHICAGO – The funeral has been set for Chicago Fire / EMT MaShawn Plummer, who died days after being seriously injured fighting a blaze in the city’s northwest.

The 30-year-old firefighter was battling a “gale-force” fire in the Belmont-Central neighborhood on December 16, in the basement of a two-story apartment building in the 3100 block of North Mamora Avenue. Plummer was removed from the building and transported to Community First Hospital before being transferred to Loyola University Medical Center for more advanced treatment. He died of his injuries on December 21.

Another man, Eladio Gomez, 37, who lived in the building, also died in the blaze.

Plummer was posted to Engine 94, 5758 W. Grace St. Fire Hall in the Portage Park neighborhood. He had just celebrated his first birthday as a firefighter / paramedic in December. He will receive a funeral steeped in the ceremony and traditions of Chicago firefighters, reserved for those who die in the line of duty.

Visitations will be held from 3 to 9 p.m. on Wednesday, January 5 at Leak and Sons Funeral Home, 7838 S. Cottage Grove. Members of the Chicago Fire Department and other fire departments will gather outside the funeral home at 6:45 p.m., with a guided tour scheduled for 7:00 p.m. . Each firefighter stops briefly in front of the coffin as a sign of respect for the fallen firefighter.

“I encourage all members of the fire department to join me in paying homage,” CFD Commissioner Annette Nance-Holt said in a memo. “I further encourage all off-duty members to attend and participate in the funeral.”

Plummer, who was not married, is survived by his parents and four sisters.