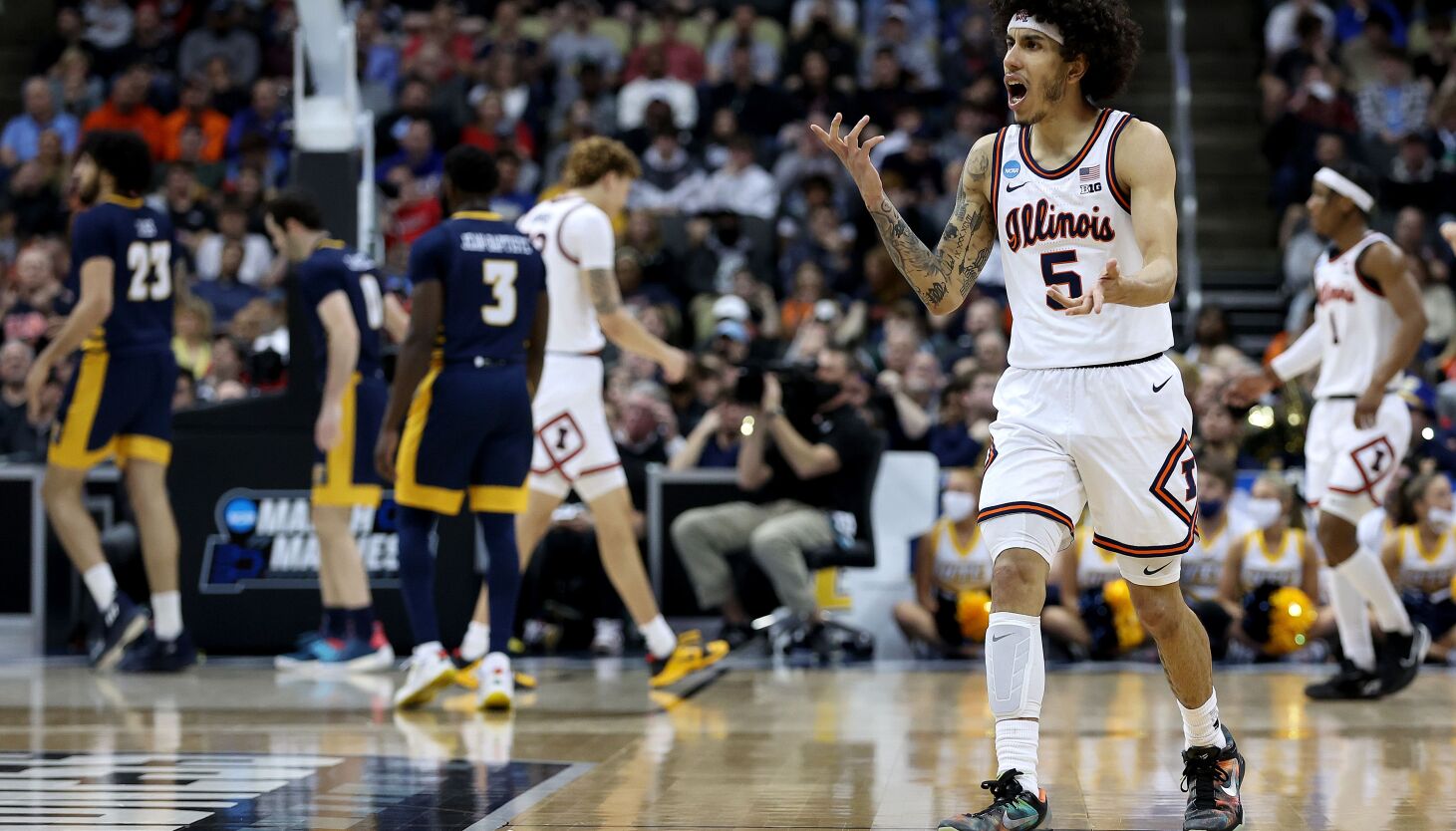 PITTSBURGH — Andre Curbelo is terrible. He’s all show, no pro. The guy doesn’t get out of bed until he has had at least two turnovers. On the list of things that could wreck Illinois’ NCAA tournament run, the oft-publicized super-sub’s unruly style of play has to be items one, two and three.

At least that’s what the yahoos who stammer in my inbox and on social media tell me.

What do they think they know? This Curbelo had a lousy first-round game against Chattanooga. That his audacity leads to mistakes that have fans slapping their foreheads in disbelief. That he was better in first year than in second year.

What don’t they know? For one, Illinois had no chance of getting past the 13th-seeded Mocs on Friday without Curbelo on the ground for a season-high 30 minutes. Zip, zilch, nada. He shot 1 for 7, had six turnovers and – guess what? – finished with a plus/minus 18 points for good. In case it needed more explaining, the Illini outscored the Mocs by 18 with Curbelo on the ground and were outscored by 17 without him.

How the hell is this happening?

“He makes other players better,” coach Brad Underwood said, “and then the fact that what he does defensively is completely overshadowed. He was electric defensively, and that’s how you build a plus/minus fast enough.

It was not unique. In the Big Ten tournament loss to Indiana, Curbelo was Illini’s only guard with a positive plus/minus. In the regular season finale against Iowa – a two-point win that earned a co-league championship – he was a plus-6 while starters Alfonso Plummer and Da’Monte Williams were in the red . In the huge win at Michigan, Curbelo led the team with a plus-17 differential in 20 minutes.

Is the plus/minus revealing? Of course not. But it’s a hell of an argument that the Illini — who take on fifth-seeded Houston on Sunday for a spot in the Sweet 16 — better let their No. 1 wildcard run wild whether the aforementioned yahoos can handle it or not.

This “thing” is what recently boiled orange and blue blood.

“I take high-risk plays,” he says, “but I think that’s what separates me from the other guards, maybe. Like everyone says, sometimes that’s good, sometimes that’s bad. …I will continue to be who I am on and off the ground always.

On this, Curbelo arouses strong reactions. Other than that, he has the makings of a tournament darling. Proverbially speaking, some athletes try to win the press conference. During a practice day at PPG Paints Arena, Curbelo crushed it without even trying.

First, he brought a searing chicken sandwich to the podium for a press conference with Kofi Cockburn, Williams and Underwood. It may not seem like much, but it’s basically unheard of to eat these things, like bringing pizza to a job interview. Between the answers, cameras on him, Curbelo feasted as if no one was watching him.

Someone wanted to know where he got it.

“NCAA,” he said, his mouth full of bird.

Curbelo interrupted the moderator at one point asking him to ask his own question. He directed him to a reporter who was transcribing the interview.

“Are you typing without looking?” Curbelo inquired, shock and fear in his eyes.

There was laughter all around as Curbelo tilted his invisible cap with a sweeping gesture.

But there was also substance, as well as a sense that Curbelo has no trouble looking inside and might just be an open book. On his defense, which Underwood describes in superlative terms, Curbelo was refreshingly honest.

“I don’t think I’ve played so much defensively in my life,” he said. “Back in Puerto Rico, no defense at all. In high school, first year [at Illinois], no defense either. I just had to make my way. Last year I did quite a bit. But this year, I took that mission more seriously and talked about doing whatever it takes to win the football game. If it’s going to be right defense and five points, six turnovers, I’m okay with that.

But why should everyone agree with that?

That’s kind of the problem.