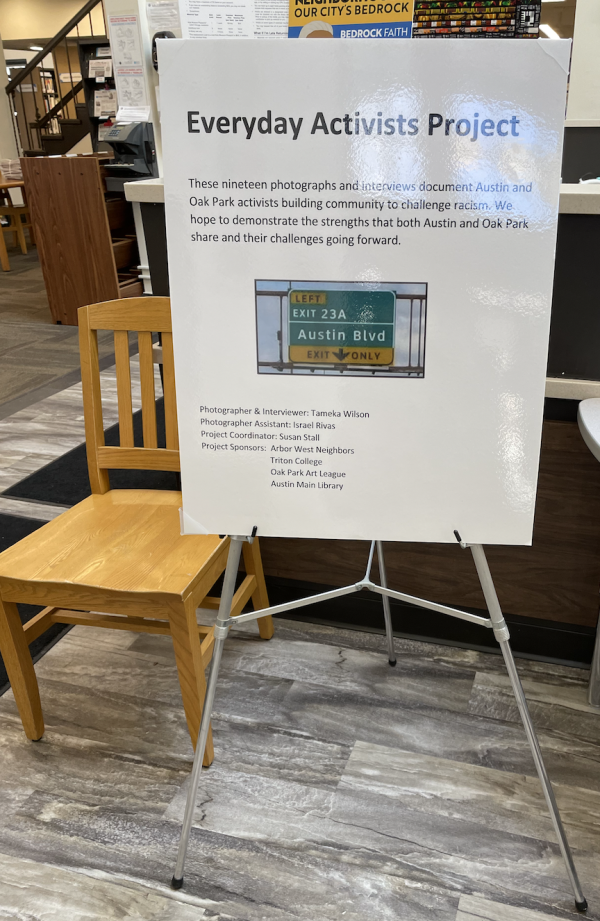 “If you leave here, I want you to remember one thing: this meeting is about building bridges between communities.”

So said Leroy Duncan, an ‘everyday activist’ from Austin last weekend during a panel discussion held at the Austin branch library as part of an exhibit. of photographs for a month ending March 31.

Duncan and five other Austin and Oak Park residents shared their thoughts during the March 13 panel. Tina Augustus, Dollie Sherman, Sandra Sokol, Vanessa Stokes and Anandita Vidyarthi spoke about their experiences revitalizing their communities. The panel was moderated by Susan Stall, one of the creators of the Everyday Activists photo exhibit.

The need to create a sense of community was a common theme among panelists, who reflected on their personal stories of how they became “everyday activists”.

Panelists said building bridges between Oak Park and Austin residents starts with communication, even if that means having difficult conversations about racism and inequality.

“How to build bridges is really about getting out of your comfort zone,” Stokes said. “It’s not an easy conversation, but if we’re going to move forward, we need to have these conversations.”

Stokes and Vidyarthi found in arts and culture an effective way to build community.

Stokes is a photojournalist, arts activist and creative consultant who helped co-create Pop Courts, an outdoor event space in Austin. Vidyarthi, an Oak Park River Forest High School alumnus, is a political activist, poet and organizer who founded the Asian student organizations South Asian Youth (SAY) at OPRF and co-founded Asian Ink at the University of Illinois at Chicago (UIC).

“If I can use art to bring people together and have other social and cultural conversations, that’s what I will do,” Vidyarthi said.

Bringing neighbors and community residents together is key to effecting change.

For Sherman, youth outreach coordinator at Austin Coming Together and leader of a neighborhood club, and Sandra Sokol, community advocate and former Village Clerk of Oak Park, the first step to improving their communities began with themselves. They took action and invited others to join them, caught the attention of public authorities and advocated for the changes they wanted to see in their neighborhood.

“We keep people on their toes as representatives of our respective communities,” Sokol said.

Augustus and Duncan said building bridges between Austin and Oak Park not only supports economic development, but also creates a support network where people learn from each other.

Augustus is an entrepreneur, organizer for the Austin Block Club Association, and founder of the Chicago West Side Chamber of Commerce. Duncan is a civic activist, member of the North Avenue Neighbors Association, Westside Men’s Network, and former community representative for the Community Justice Center who worked with the 25th Police District.

“To be an everyday activist, you have to have support,” Duncan said.

Panelists reflected on a variety of topics that are critical to developing and improving the lives of residents of Austin and Oak Park, including:

*Young people are the future of the community and must be engaged. “[Our kids], they really need us,” Sokol said. She reflected on the negative impact of social media on young people, calling on residents, parents and neighbors to interact, engage and build community with young people in Austin and Oak Park.

* Public safety is essential to making Austin a safe and prosperous community. Duncan said people need to feel safe in their neighborhoods and encouraged residents to engage in conversations with their police districts to advocate for safety.

Panelists urged residents of Austin and Oak Park to come together and work with their elected officials to improve both communities.

“It’s the system. It may be broken and shattered and fragmented and crazy, but it’s still the system… where we live. … So we have to find a way to work with these people,” Stokes said.