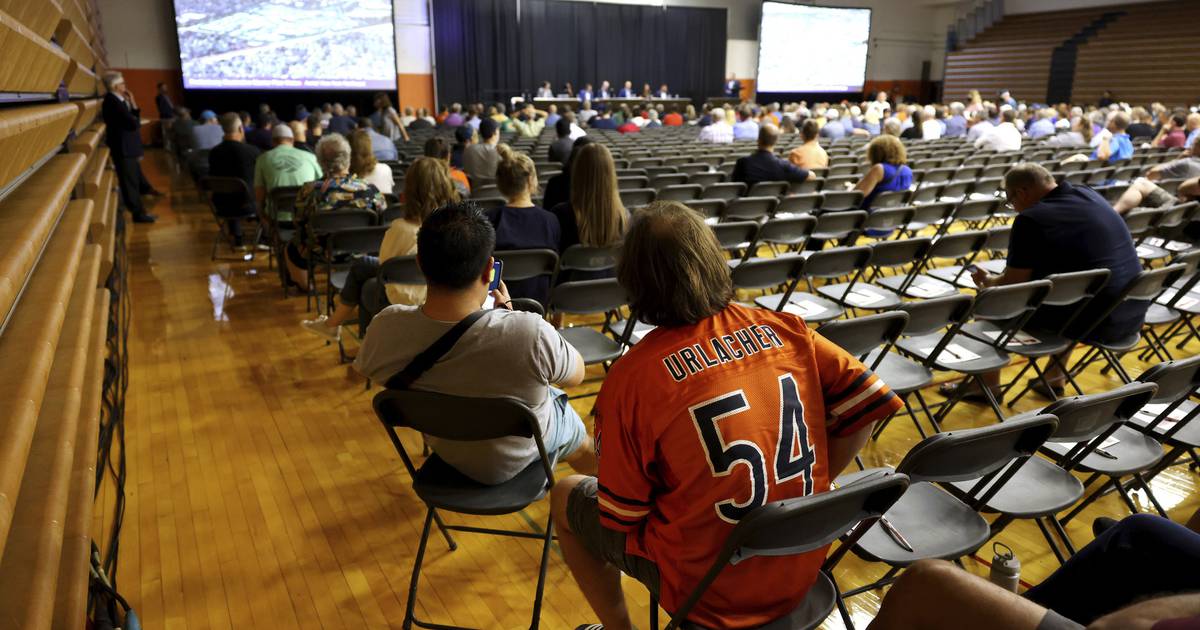 Rounds of applause greeted the Chicago Bears’ presentation of plans for a new, closed stadium in Arlington Heights. “I’ve never had so much applause in my life,” said team president Ted Philips.

The team’s proposal to build the stadium and an adjoining mixed-use complex won support from many who attended the team’s initial sales pitch on Thursday. This is encouraging for team leaders who have emphasized that the project cannot happen without taxpayer funding. Many commuters told the Tribune that they support the project, but don’t want to pay more tax for it.

Opponents are already mounting a campaign to prevent any public spending under the deal. And a group of outside observers supports the argument of these opponents. Economists who have studied the matter say that public funding of these sports stadiums and related development is generally a bad deal for taxpayers.

As the Bears prepare for their season opener on Sunday at their current home of Soldier Field, the future of this century-old stadium and the potential for a new stadium could largely hinge on an economic debate.

Recent deals to build National Football League stadiums have secured huge public funding. The Tennessee Titans are in line for $500 million from their state, while the Buffalo Bills are expecting $850 million in state and local funding. While the Bears say they will pay for the stadium and its non-retractable roof themselves, they say they need help paying for infrastructure such as roads and sewers in the nearby neighborhood, which would include residences, entertainment venues and other amenities.

In return, the team predicts that construction of the project would create 48,000 jobs and an economic impact of $9 billion. Without sharing the basis for their projections, the team said operations at the site would then create nearly 10,000 permanent jobs and generate more than $1 billion in economic impact each year.

Economists, however, are highly skeptical of such claims. They warn that stadium projects are generally a bad investment for local governments, largely because they take money that would otherwise go to other local businesses. A University of Chicago survey found that a majority of economists agreed that the costs to taxpayers are likely to outweigh the benefits.

Robert Baade, professor of economics at Lake Forest College, is the author of several articles on the impact of agreements on sports stadiums. He said such “pie in the sky” projections are often illusory. A common problem in estimating economic impact, he said, is the “substitution effect” – the idea that most of the money spent on stadium complexes by local residents would have otherwise been spent on other local restaurants, bars and businesses.

Another problem is that a lot of the money spent goes to the team, which is then spent on multimillion-dollar salaries for players who often don’t live in the city where they play.

“Numbers are often exaggerated,” he said. “We see white elephant stadiums and developments everywhere. It’s glamorous and alluring, but the economic realities are almost always disappointing.

Baade said the team’s demands for public funding are typical of “thinly veiled threats” from teams to take their ball and play elsewhere – as the Oakland Raiders did before moving to Los Angeles and then in Las Vegas. In the case of the Bears, they could stay at Soldier Field. They have a lease until 2033, and Mayor Lori Lightfoot has offered to add a $2 billion dome to the stadium, though she didn’t say how that would be paid for.

But Soldier Field is owned and operated by the Chicago Park District and has the smallest seating capacity in the NFL, at 61,500. By building their own stadium, the Bears could earn hundreds of millions of dollars in stadium naming rights. , greater capacity, corporate suites, parking, concessions, and special events such as concerts, the Super Bowl, and the college playoffs.

The Bears’ concept plan calls for a mixed-use development, which may include multi-family housing, retail, restaurants, a sports betting venue, a music venue, parks and open spaces, including a pond for kayaking.

But JC Bradbury, a professor of economics at Kennesaw State University in Georgia, cited a study that found property values ​​in Seattle and Charlotte, North Carolina, rose after professional basketball teams left these towns.

When the Atlanta Braves moved from Turner Field to their new stadium, property values ​​also increased. But Bradbury’s study of the Braves’ new home at Truist Field found that rather than being the intended ‘home run’ for the local economy, it was more of a ‘pop fly’. In 2013, Cobb County pledged $300 million for mixed-use development costs. But the stadium’s revenue hasn’t matched that investment, costing residents an estimated $15 million, or $50 more per household per year.

State lawmakers expressed little enthusiasm for a subsidy for the Bears, which Bradbury said would divert consumer spending from Chicago. Arlington Heights Mayor Tom Hayes, however, left the door open for a “last resort” public subsidy such as a Tax Increase Funding District, or TIF. It would use increases in property tax revenue, usually to pay for infrastructure such as roads and utilities.

Although such a subsidy is likely to be much lower than stadiums elsewhere, Bradbury said it is unlikely to be worth it.

“Saying the Chicago deal is better is like saying smoking a pack of cigarettes a day is better than four packs a day,” Bradbury told the Tribune. “Less subsidy is better, but it’s still bad policy.”