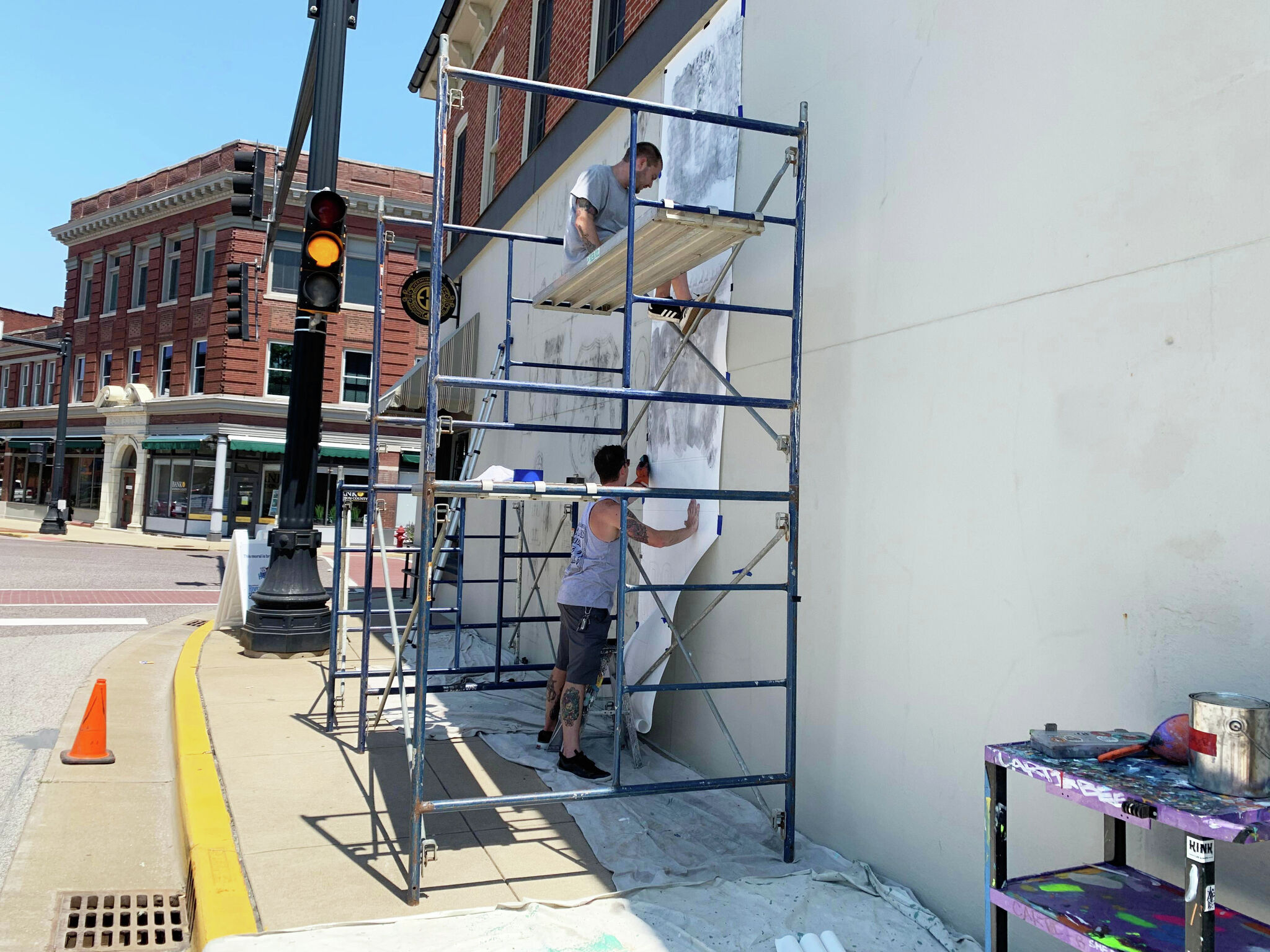 Ricketts recently began a nearly week-long process to paint a Route 66 mural at the southwest corner of West Vandalia and South Main streets in downtown Edwardsville. The mural will be displayed on an exterior wall of the building facing Walgreens.

“It’s super cool,” he said. “This place here in Edwardsville is a nice, smooth surface, so we’re ready to paint.”

The work in Edwardsville comes just after Ricketts completed a mural at 101 E. Main St. in Collinsville. Using a similar layout, 12 murals are planned to celebrate Route 66, each with a signature touch that highlights the city where the mural is located.

“I’m really happy with how the first one went in Collinsville,” he said.

The series of artworks stem from the Route 66 Mural Program created by the Great Rivers & Routes Tourism Bureau. The program is just one part of the office’s multi-level Route 66 product development plan with a $919,000 grant in preparation for the 100th anniversary celebration of “The Mother Road” in 2026.

“We want to be part of Illinois and the national celebration with an exciting new section of the Mother Road in southwestern Illinois,” said Cory Jobe, president and CEO of Great Rivers & Routes. Tourism Bureau. “This grant will allow us to do just that and help communities along the last 100 miles of Route 66 in Illinois shine.”

Route 66 stretches approximately 2,400 miles from Chicago to Los Angeles. Artist Jamie Stang creates the Litchfield Mural which features a sunset and farming scene on the east side of State Street, and a full harvest on the west side of State Street. These murals should be completed by the end of the summer.

The Edwardsville building is owned by LJC Partners, which is owned by Matt and Kristen Pfund and is across the street from Walgreens. According to LJC Partners, LLC, the building has always had its west face painted. Under the agreement signed by the store owner, the mural must remain untouched until December 31, 2026, and then it can be repainted if the owner wishes.

“We are proud to show the role Edwardsville has played in the history of Route 66 with this mural,” said Edwardsville Mayor Art Risavy.

Ricketts uses a leap pattern for the murals. This is when the artist draws the drawing to scale on paper, then punches the paper with small holes, using a bag full of charcoal powder to highlight the drawing. He then paints the drawing.

“The murals really bring out a good sense of community,” Ricketts said. “It brings more business to the building and people from outside the community to the mural for photos. It’s cool to see that happen.

“We were really excited when they contacted us for the murals,” Ricketts said.