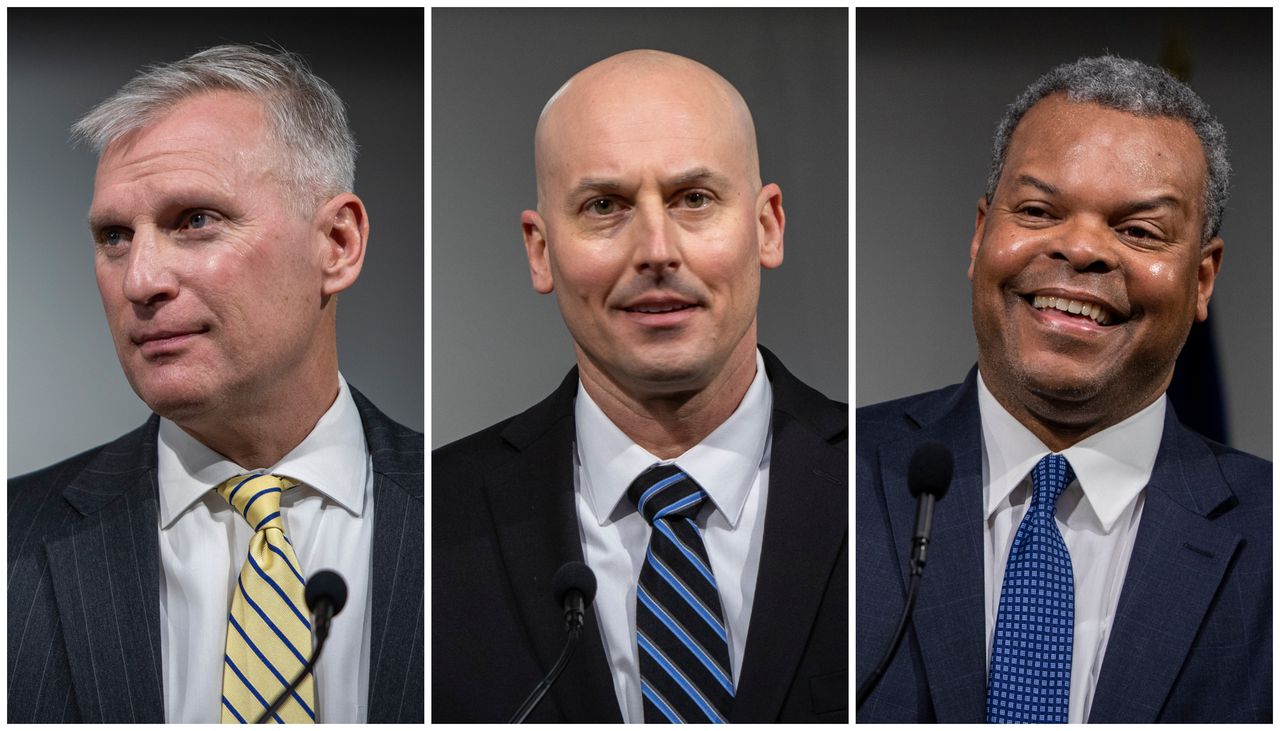 GRAND RAPIDS, MI – Police-community relations, funding, transparency, accountability, reform, the racial makeup of the police force and an increase in crime were among the common topics community members asked for on Wednesday January 19 to the final three candidates for the position of Grand Rapids Police Chief.

One of the candidates began by responding to reports that he shot a man while on duty as an officer in 1997. The shooting was ruled accidental.

The just over two hour question-and-answer style town hall saw the candidates given around 35 minutes each to introduce themselves and, for the most part, answer questions from the audience in person and online.

The selection of the next chief will ultimately be decided by City Manager Mark Washington, but he said he was considering input from community and city staff. He said he would announce his decision on the next police chief in the coming weeks.

About 40 people attended the forum in person, and much of Wednesday’s conversation focused on how the next chief would lead a department that works with the community rather than operating at odds with it. For officers who wrongfully harm residents, the candidates spoke of accountability.

Candidates also talked about increasing community outreach efforts. All three candidates expressed support for creating resources, including mental health co-response models, that would ease the burden on the police department and help address fundamental issues that officers are not trained to address.

At the top of his introduction, Jackson addressed some of the controversy surrounding a fatal incident during his career.

In 1997, Jackson fatally shot James Rey Guerrero after fleeing a traffic stop, according to a Chicago Tribune report.

Jackson testified before an inquest jury that the shooting was accidental, saying his gun went off during a fight with Guerrero, according to the Chicago Tribune. Some witnesses said there was no struggle and that Guerrero was shot to the ground.

Jackson told the community on Wednesday that he believed Guerrero had a gun, so he drew his own. As Jackson closed in on him, he said Guerrero turned around and grabbed his arm and his gun, knocking them both to the ground and the gun discharging.

“One of the worst days, one of the worst experiences I’ve ever had,” he said. “It’s important to note that the District Attorney’s Office and the Police Department’s Internal Affairs Division conducted a thorough investigation and they both came to the same conclusion: that there was no wrongdoing. from me.

“Extremely, extremely terrible incident that happened. Men and women join the police department to save lives, to help people, to get involved in the community, to solve community problems – c That was my goal. Unfortunately, the shooting happened, and it’s something I think about and it’s been with me – for 24 years.

The inquest jury ultimately concluded that the shooting was accidental and that Jackson should not be criminally charged. The Milwaukee County District Attorney’s Office accepted their findings.

The Milwaukee County District Attorney’s Office denied a request from MLive/The Grand Rapids Press for the inquest jury’s records and documents, saying they are exempt from disclosure under the public records laws of the United States. State. MLive/The Grand Rapids Press has submitted a public record request for the police report and other investigative materials, including the Internal Affairs report.

City officials said they were aware of the incident and it was ruled accidental. They said that doesn’t hamper Jackson’s 27-year career in law enforcement, which has been “widely praised for his community-based approach to policing.”

Kent County Commissioner Robert Womack, who represents part of the southeast side of the city, asked in light of the incident and Grand Rapids NAACP President Cle Jackson did not support Jackson. for the job because of it, if he was the right candidate at the right time. for the city.

The contestant said he respects the NAACP and asked to be evaluated on the breadth of his career, not just on set. Jackson said he would sit down with the NAACP leadership.

An NAACP representative told the meeting that the organization’s officials are never above sitting down, but believe more time should be given to assess each candidate.

Blocker, who is a 25-year veteran of the Battle Creek Police Department and its current chief, called it a pivotal moment for law enforcement and said he had always dreamed of returning to the city, a moment in which he had asked to leave the police. academy but was first offered a job at Battle Creek.

He praised the resilience and diversity of the city and how it has transformed over the years.

“I think law enforcement in general, this is a pivotal moment, a real turning point, as we have moved from defunding the police to reimbursing the police, but the key here is that the community will demand, demand that we do it differently,” Blocker said. “And I think to some extent we did this because we had to do it in Battle Creek because we didn’t have the resources and the ability and maybe the death, but you have it here.

“And so, if there was a city that I thought professionally I wanted to be involved in, and I could, with the support of the community, have the opportunity to find that groove for GRPD, to bring back the magic of who they were but just as above all doing it with the community, that would be it. And so, it’s worth the risk to go for it.

Winstrom, who has worked for the Chicago Police Department for more than 20 years, began by recounting that his brother received a lengthy prison sentence for a small amount of cocaine. That experience at age 11, he said, shaped his trajectory as one of eventually wanting to change policing from within. He praised the diversity, vibrancy, growth and culture of Grand Rapids.

“And I believe it. From the conversations I’ve had with everyone I’ve met today, with the research I’ve done, this city is serious about good policing. For someone in the police leadership, that’s something I want to be a part of. »

After beginning with his explanation and thoughts on the fatal shooting, Jackson, a 26-year retired veteran of the Milwaukee Police Department, spoke about his career and what he described as a “type of concentration laser” on community outreach in a leadership position, including trauma-informed care that provided guidance and faith-based initiative.

In addition to collaborations, operations and other victories during his career, Jackson also spoke about what he described as painful incidents, including the fatal shooting of Guerrero, the loss of his friend in the line of duty and the loss of colleagues by suicide.

The entirety of Wednesday’s event can be viewed here. It starts around the 23 minute mark. The public can provide feedback on each nominee via an online survey, available here, or by calling 311 or 616-456-3000. Although basic demographic questions may be asked, the survey is anonymous and people can give their opinion until 5 p.m. on Wednesday, January 26.

Anti-abortion advocates gather at the Michigan Capitol and express hope that Roe v. Wade will be knocked down