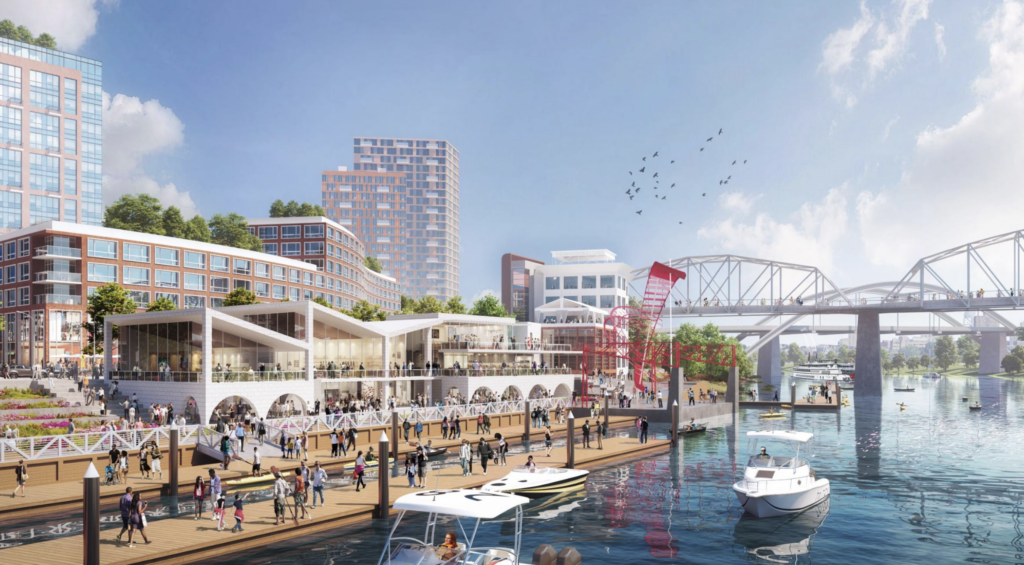 Am I the only one finding all the hoo-ha on the recent published vision plan for the future of Nashville’s east shore is just a wee bit (I mean pretty seriously) overdone? A 135-page report titled “imagine the eastern shore(all lowercase with the “eastbank” coat rack for that perfect dose of sleek urban edginess) lays it all out, with lots of lovely color renderings that help us imagine a future where happy people kick soccer balls into squares dappled greens and sip lattes in sidewalk cafes surrounded by stunning new buildings. I want to go! But on closer inspection, one is left with the sneaky suspicion that there isn’t much new or interesting or visionary.

After having a good time with the brilliant vision document (I will list a few items by page number below) I come away with three main impressions. First: there are talented professionals in the metro planning department who put a lot of time and effort into it, and they deserve kudos for delving into the area’s history, ecology, and zoning as a canvas. background of the vision process. Two: The East Bank is, as the report observes, underutilized and insufficiently connected to the rest of downtown Nashville, straining to imagine its dignified future. And (but) three: the so-called vision finally presented here is distinctly disappointing because it is not so forward-looking in its approach to urban planning, and because it neglects to seriously consider the context broader social, civic and political from the rest of Nashville.

Will the West Bank be our “next big neighborhood”? In fact, what the plan envisions (p. 100-101) are four pedestrian mixed-use urban neighborhoods with a cute two-word name conjured up for each.

I love the verbal inventiveness, but honestly, it’s a bit of a stretch to think of these envisioned neighborhoods as actual neighborhoods. The one called Central Waterfront is basically a gargantuan stadium and a public space in front (more on the stadium in a bit). Jefferson-Spring is primarily touted as a “key intersection that connects the East Rim to the North River.” Capitol Crossings has some potential around the Main Street corridor, but on its own is a small area surrounded by a stadium and a freeway. And the report admits that Shelby’s Bend is a pipe dream – unlikely to happen anytime soon “given…current conditions and common ownership”.

We are told that these neighborhoods will be full of affordable housing. Don’t get me started on “affordable housing”. Yes, do it. Look, I totally agree, and chances are you do too. Everyone too. No politician has yet stood for election to campaign on the need for more “unaffordable housing”. But the problem is that the phrase has become a verbal talisman of public policy – rattled off at all times with anything to do with anything to do with economic development, cost-of-living woes, poverty, crime, whatever is involved. It’s as if the simple act of pronouncing the sentence is tantamount to creating a part of it. Look at the beautiful rendering in the plan (p. 109) of the proposed new boulevard that would be the mobility backbone of the east bank plan. Do you see anything remotely resembling affordable housing? What I see is Gulch 2.0.

Let’s talk about public transport. “Multimodal” is the buzzword of the moment, used relentlessly throughout the vision document (over 50 times and yes I counted) to conjure up an image of continuous motion via multiple forms of transport intertwined through a utopian urban dreamscape of wide sidewalks, leafy parks, quiet streets and groovy low-to-mid-rise buildings. The images are pretty, but let’s face it: it’s just the basics: cars, buses, sidewalks and bike lanes, set up like other cities have been doing for decades. The East Bank plan elevates them as if it were futuristic to think of how they work together within a high-density urban core. The idea of ​​a “transit hub” in the West Bank (fancy term for what would essentially be a bus transfer point) isn’t crazy as a way to connect this area to the rest of the city – except no one thinks seriously about how public transit in the rest of the city and region exceeds the current mid-20th century model.

One notable (by which I mean mystifying) aspect of the plan is its claim that the Titans stadium is somehow not the elephant in the room. Admittedly, the stadium does not go unnoticed in the document, but it is mysteriously absent from all the pretty drawings of the future Eastbankistan, and left unlabeled on many maps. It’s as if the planners want us to believe that the new neighborhood will be so urban and cool that no one will see the elephant. This excerpt from the plan (p. 101) is priceless:

“In either scenario [existing stadium location or new stadium closer to the interstate], the public face of the stadium must be integrated with the surrounding neighborhood – in terms of scale, mass and character. Stadium parking should be distributed as evenly as possible throughout the neighborhood in underground car parks. However, the new urban network of the Rive Est and the connected multimodal transport networks will allow stadium spectators to travel to the Rive Est by means of transport that do not require parking.

The idea that a seventy-thousand-seat stadium will be integrated into this or any “district in terms of scale, mass and character” is an illusion. The plan gives juice to this fantasy (p. 122) with the concept of a “stadium village” (because it takes a village to tame a wild elephant) and offers as an example a nice photo (p. 123) of the small grassy mound at Wrigley Field across from the Zachary Hotel on North Clark Street in Chicago. The idea that a forty-thousand-seat ballpark built in a neighborhood that existed over a century ago speaks volumes about our ability to incorporate the mass and scale of a city-wide monster. NFL in an authentic, walkable surrounding neighborhood (the words of the plans, not mine) seems comical.

Equally peculiar is the projection that “connected multi-modal transport networks” mean few parking needs other than those that could be distributed in underground structures. Currently, spectators at Nissan Stadium to fill 7,500 spaces on site and who knows how many more in private lots and nearby garages. There is nothing in this or any other plan that will seriously address, let alone improve, public transit in the metropolitan area. Do visionaries imagine that in Eastbank’s dream future, all Titans fans who aren’t perched in downtown hotels will be living in East Nashville? Because almost everyone will always be driving the fucking game.

Asking the crowds who enshrine and profit from the civic embarrassment that is the downtown tourist drunken fest envision Nashville’s future as an enlightened metropolis is like letting U.S. Senator Marsha Blackburn teach a course scholar on climate science.

This retrograde approach to East Side planning is set against a disappointing backdrop of muddled thinking about the current and future state of Nashville’s tourism maelstrom. For locals, much of downtown is currently just a second-rate theme park, albeit quite profitable for the hotels and honky tonks escaping it. The problem is that those who profit from a downtown that few people want to deal with think they should be the ones to guide us forward.

Last month, the Nashville Business Journal ran out of steam famous Ryman Hospitality CEO Colin Reed is one of the city’s “most influential players” who has “big ambitions for the future of Music City tourism”. Reed’s take on the future of downtown is alarming, but it has the happy side effect of exposing the fiction in all that West Bank “neighbourhood” nonsense. From the NBJ story: “The planning process for the restoration of Second Avenue and the development of the East Bank is critical, Reed said, as Nashville continues to capitalize on its visitor demand.” Yes, because when I think of what makes a great new urban neighborhood, the first thing that comes to mind is capitalizing on “visitor demand”.

Reed and his friend Butch Spyridon, who runs the Convention and Visitors Corp and considers nightly occupancy of hotel rooms the only measure of urban health that matters, are convene what NBJ calls a “powerful welcoming committee” to develop plans to address all of our issues – “safety and security, cleanliness, affordable housing, homelessness, public transportation/traffic, and public schools.” May God help us. Asking the crowds who enshrine and profit from the civic embarrassment that is the downtown tourist drunken fest envision Nashville’s future as an enlightened metropolis is like letting U.S. Senator Marsha Blackburn teach a course scholar on climate science. (Or on anything for that matter.)

We can agree that the East Shore is a blank canvas whose proximity to the river and the city center invites reinvention, and planning its future is a commendable corporate citizen. But what this vision plan lacks are clear links to the current reality from which the future springs – a reality where declining demand for office space means that the future of downtown workspaces and associated retail businesses is seriously challenged; where the needs for public transport alternatives in the city and the region are not sufficiently taken into account; where the health, education and economic well-being of Nashville’s children trails most of the state; and where the city’s crime rate lands among the five worst state capitals.

In this reality, a jazzy set of colorful blueprints for Gulch 2.0 is less of a vision than a distraction.