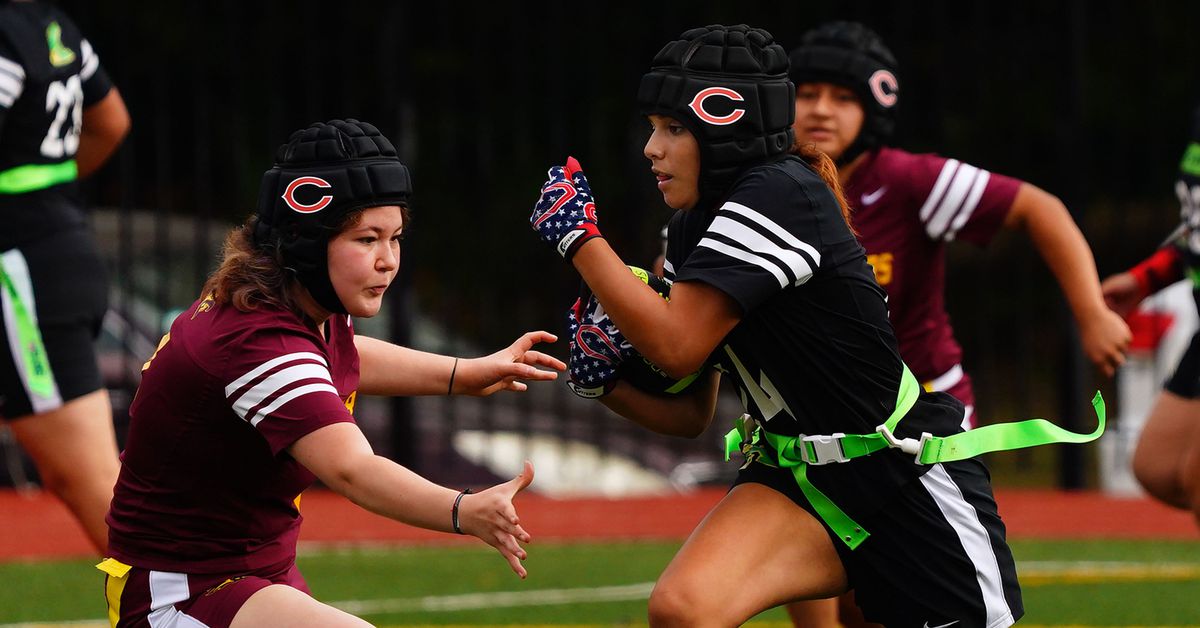 Today, Brim, who also plays basketball and runs for the Broncos, is one of the first girls in town to try their hand at another traditionally male-dominated sport: soccer.

She is one of some 400 athletes from 21 schools who have registered to participate in the first season of the Public League for Women’s Flag Football.

The program was started with the help of the Bears and Nike. The NFL team is providing organizational help, and coach Matt Nagy and the Bears Care charity have teamed up to provide cleats for all players. Nike donated uniforms to all players.

The Bears are hoping the Public League pilot program will spark interest in women’s flag football across the state so that it one day becomes an IHSA sanctioned sport.

“To make football grow, it has to be more inclusive,” said Gus Silva, head of youth football programs and the Bears community.

He and the Bears have been working on the idea since 2018 and were originally slated to launch with eight teams. When they discovered that more than 20 teams were wanted – during a pandemic, nothing less – they were pleasantly surprised.

â€œWe thought if we did it right it would grow organically,â€ Silva said.

Next year he sees 32 to 48 teams at CPS, and there has been contact with other conferences statewide.

What is happening in Illinois reflects the growth spurt the sport is experiencing nationwide. It is a preparation sport recognized in five other states and is beginning to gain college status in NAIA schools and junior colleges. The NFL is supporting an effort to add flag football to the schedule for the 2028 Olympic Games in Los Angeles.

To get there, the pool of players will have to expand. This is where the CPS program can help by attracting athletes like Brim and Kelly, senior quarterback Cynthia Villalvazo from other sports.

â€œI wanted to play soccer or rugby, but then they brought out flag football for the girls, and I was like, it’s a great experience,â€ said Villalvazo, who played volleyball and softball. “I want to play [flag] college football. I try to do research in schools that have it.

â€œMy track coach, she told me I should give it a try,â€ Brim said, and the Kenwood QB is happy she did.

â€œMy team, we have a good bond so that makes everything better,â€ said Brim. “It’s a great experience.”

It is also a chance to learn.

â€œWhen I first went out I had no idea,â€ Brim said. “I didn’t know anything about football, and the last two weeks of training I learned a lot.”

This includes the differences between the 11v11 tackling version of the sport and the 7v7 flag style. There are two 20-minute halves. Although he is dominant – there are six eligible receivers – quarterbacks are also allowed to run. There is a four-second count, with four blitzes allowed per game. Punting is allowed, but there is no set kick and teams have four tries to gain 20 yards.

CPS schools began training on August 18 and a five-week season began on September 11. Schurz and Steinmetz host matches for the North and West Conference teams, while Kenwood and Englewood STEM host South and East matches. The quarter-finals are on October 12 at Gately and Rockne, the semi-finals and the title game on October 16 at Lane.

The future looks bright, according to Kenwood coach Khristina Cruz, who has been playing the sport for 10 years.

“Flag football is here to stay,” she said. â€œAfter this first year, everyone will be fine. The second and third years are the years to watch. That’s when it’s going to be super intense and super competitive. He’s going to say, “Yeah, this sport is here, should be at the Olympics, should be at the college level.” “”