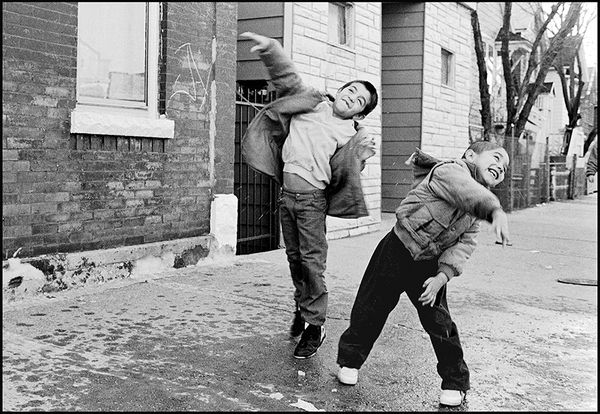 PILSEN – The Harold Washington Library now houses a collection of 88 photos of Pilsen in the early 1990s, captured by Japanese photographer Akito Tsuda.

These photos have been hailed by the community of Pilsen as an important reminder of the neighborhood’s history as a working-class Mexican-American neighborhood, even in the face of recent gentrification. Tsuda’s shots include candid shots of children playing in the streets, domestic activities, and old storefronts.

The collection is available to the public in the Special Collections Reading Room on the ninth floor of the Harold Washington Library, 400 S. State St. Appointments required to view photos from noon to 4 pm on Mondays and Fridays.

Tsuda’s photos had been stored, relatively invisible, for more than 20 years after he returned to Japan in 1994 after graduating from Columbia College.

Tsuda said he didn’t like looking at his old photos, thinking it was “too sentimental and a setback to move forward in current life.” He said he received many positive comments after sharing the photos on social media in 2016 and reconnecting with people he knew in the neighborhood.

After the positive response to the photos, Tsuda decided to print a book in 2017, “Pilsen Days,” filled with his black and white snapshots of the neighborhood. A community group raised funds in 2017 to bring Tsuda back to Chicago for a book release and photo exhibition.

“Their voices swept away my worries and taught me that remembering the past has a lot of good sides, like creating a stronger sense of self and bringing energy to life today,” Tsuda said. “It was an immense pleasure that made me want to find a permanent place to discover our path of memory.”

Tsuda said he was looking for a permanent place to keep the photos to give back to the community that supported his art, but he never imagined such an opportunity as the Harold Washington Library.

The library “praised not only the photos from Pilsen’s daily life, but also the continuous communication between people and me,” Tsuda said. His “receptive mind opened the door to archiving Pilsen’s photos and made them accessible to the public.”

Subscribe to Block Club Chicago, an independent, 501 (c) (3) newsroom run by reporters. Every penny we report on Chicago neighborhoods.

Click here to support Block Club with a tax-deductible donation.

Thank you for subscribing to Block Club Chicago, an independent, 501 (c) (3) newsroom run by reporters. Every Dime We Make Raise Chicago Neighborhoods. Click here to support Block Club with a tax-deductible donation.