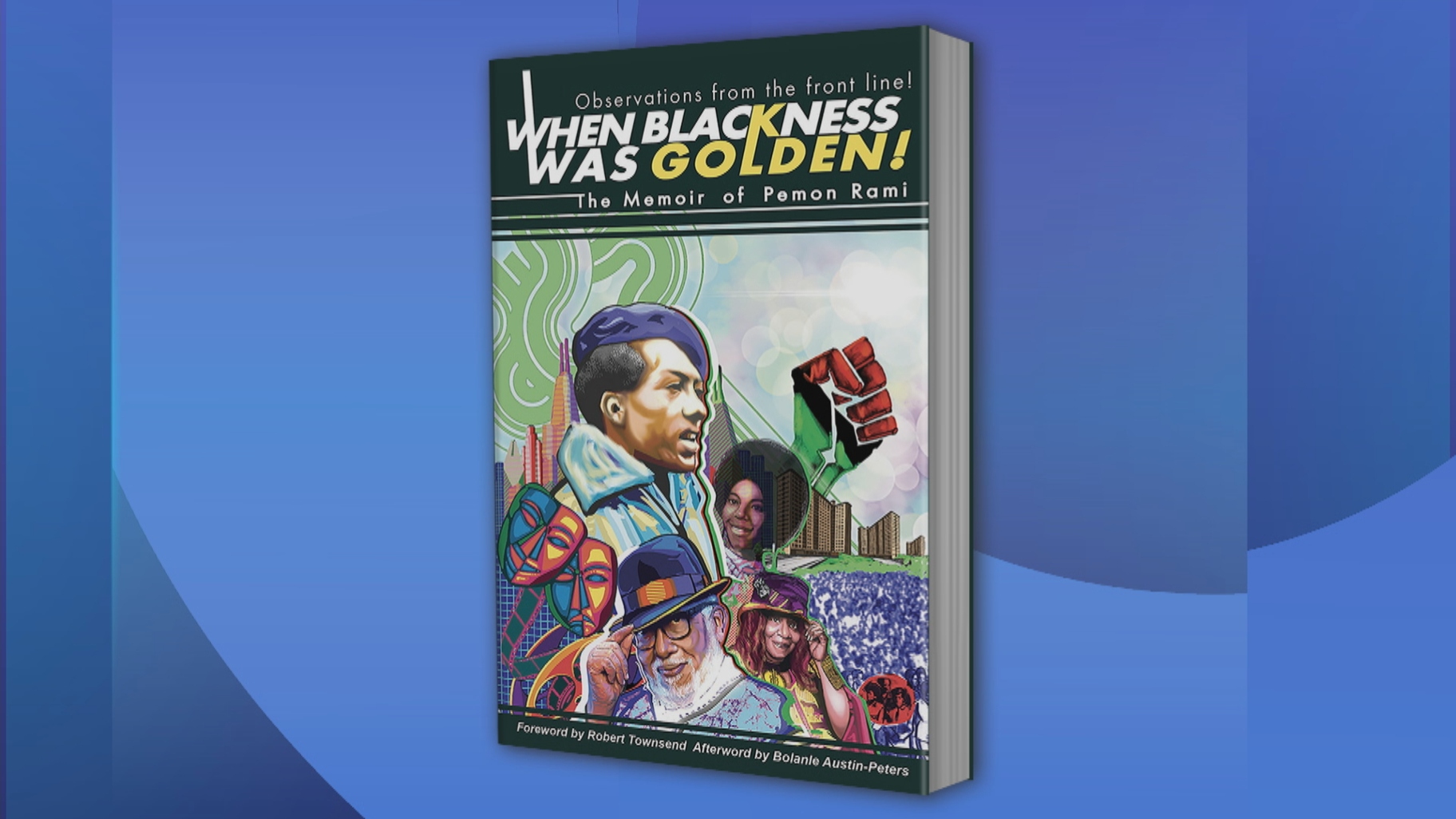 A new book capturing what it was like growing up in Bronzeville in the 1950s and 1960s is the latest installment from our Black Voices Book Club.

“When Blackness was Golden!” : Observation from the front line” is a memoir by Pemon Rami. It’s a coming-of-age story that gives readers insight into the civil rights movement in Chicago and a time when black culture and excellence were on the rise.

“It’s a retrospective. It’s a throwback to a time when we were more interested in developing the group than the individual,” Rami said. “You’ve seen the proliferation of organizations like the League of African American Patrollers, black psychologists. Almost every school had an organization made up of parents, concerned parents who worked in the schools, you had institutions all over the city that were responsible for creating environments where people could talk about eliminating violence.

Rami said he named his memoir “When Darkness Was Golden!” to describe the rise of black culture during this period.

“During that period, the 1950s of course is when Emmett Till was killed and there were a number of lynchings during that period, but when you get into the 60s you get another different sense, you get a sense of manhood. , you feel like people understand their relationship with Africa. People appreciate their natural beauty and their natural hair,” Rami said. “When I said it was golden , it was more about what we thought of ourselves, our commitment, even singers and musicians and artists and filmmakers were geared towards developing uplifting work that would restore us to our traditional greatness.”

An excerpt from “When Blackness was Golden!” : Observation from the front line”, a memoir by Pemon Rami

“Don’t allow yourself to believe that your natural beauty requires augmentation to turn you into a scaled-down version of another cultural group.”

When Maséqua and I met, I had already started working with Jim Harvey on opening the Umoja Black Student Center at 251 East Thirty-Ninth Street, directly across from Wendell Phillips High School. By the early 1970s, African-American student movements were springing up everywhere – on campuses, in high schools, and in communities. Students asserted new demands and priorities. The birth and leadership of Umoja Black Student Center required young leaders, and I gladly accepted one of those roles.

I had contacts at many high schools and colleges in the city through my show business, which made recruiting easy. Umoja opened as a cultural center and hostel for black students.

The Umoja Black Student Center was run by a central committee of twelve members, including myself, who decided on the efforts and philosophy of the organization as well as the activities in which we would engage. I was the coordinator of Black Students for Defense (one of the subgroups) of the Afro-American Student Association.

The Umoja Black Student Center reflected this multicultural programming. It was the home of African-American teenagers and adults in Chicago trying to find each other.

In November 1967, Englewood High School became the epicenter of our efforts when Owen Lawson, a teacher who insisted on including black history in his lesson plans, was fired. We met the students, helped them develop their strategies, and even cut or styled their hair for those who wanted to wear their natural hair. Englewood students staged walkouts and protests, but despite their efforts, Owen was not reinstated. Lawson’s struggle demonstrated the need for greater black control over our schools and, more specifically, our education.

Broadcast veteran Harold Lee Rush, one of Englewood’s student leaders at the time, became a good friend and joined my acting group.

One of my personal goals while playing in various schools and community functions was to recruit members and join the variety of school organizations to find leaders who could help us organize people. I was able to recruit many people to join our efforts, which had an impact on the rest of the movement. I learned to understand the skills and work of activists and the powerful role they play in any community, city or country.

The Third Black Power Conference was held at the historic Church of the Advocate in the heart of North Philadelphia from Wednesday, August 28 through Sunday, September 1, 1968. The conference drew over 4,000 people, far exceeding the capacity of the building .

Maséqua and I co-chaired the high school students’ workshop. One of the defined outcomes was a plan to return to our respective cities and schools to organize a movement to create the major changes needed in the education system. In many ways, the current Black Lives Matter movement is the contemporary version of our movement in terms of young people leading the action in the streets.

While I was in Philadelphia for the conference on Thursday, August 29, five members of the Emergency Advisory Committee held a midnight meeting at the Umoja Center to discuss the results of actions taken around the Democratic Convention and the state of the police state in Chicago. During the meeting, several shots were fired in the building. The members rushed to save their lives. Umoja Center president Jim Harvey remarked, “The attack was an extension of the racist war against black students seeking self-determination for all black people.”

When I returned to Chicago, we learned that there had been shootings at the center and that one of our members had been murdered a few days later. I immediately began contacting other students and organizing small gatherings to share conference results and events. In the fall of 1968, student protests began at Austin and Harrison high schools. We saw these protests as opportunities to move forward.

On Sunday, October 13, 1968, I held a final pre-boycott meeting of twenty-five representatives from over thirteen Chicago high schools at the Umoja Black Student Center. The purpose of the meeting was to consolidate the growing protests in many high schools and to form the Black Student Advocacy Subgroup for African American Student Organizing to organize our collective demands and protests. I was selected coordinator.

High schools represented included Calumet, Chicago Vocational, Dunbar, DuSable, Englewood, Harlan, Harrison, Lindblom, Marshall, Parker, Wendell Phillips, Simeon and South Shore. During the meeting, we laid out plans for a citywide school boycott and distributed copies of the manifesto containing twelve demands, most of which were developed during the student workshop at the national conference. Black Power. We attended a Me speaking to the press at the fake CPS funeral with Maséqua and his brother Relman ST-11006287-0001, Chicago Sun-Times collection, Chicago History Museum meeting at the Board of Education to submit our series of demands that we called the Black Manifesto.

Demands of the Black Manifesto

2. Inclusion in all courses of the contributions of black people

10. Eat better in the cafeteria

12. More homework required to challenge black students When our demands were not seriously considered, we launched boycotts.

The first citywide boycott took place on Monday, October 14, 1968. According to published reports, between 27,000 and 35,000 students did not attend school. We held a rally at the Affro-Arts Theater and then marched to Washington Park, where I addressed the large crowd with Jim Harvey, Victor Adams and Russ Meeks. We decided to boycott school only on Mondays because we wanted to show that we were still interested in getting an education.