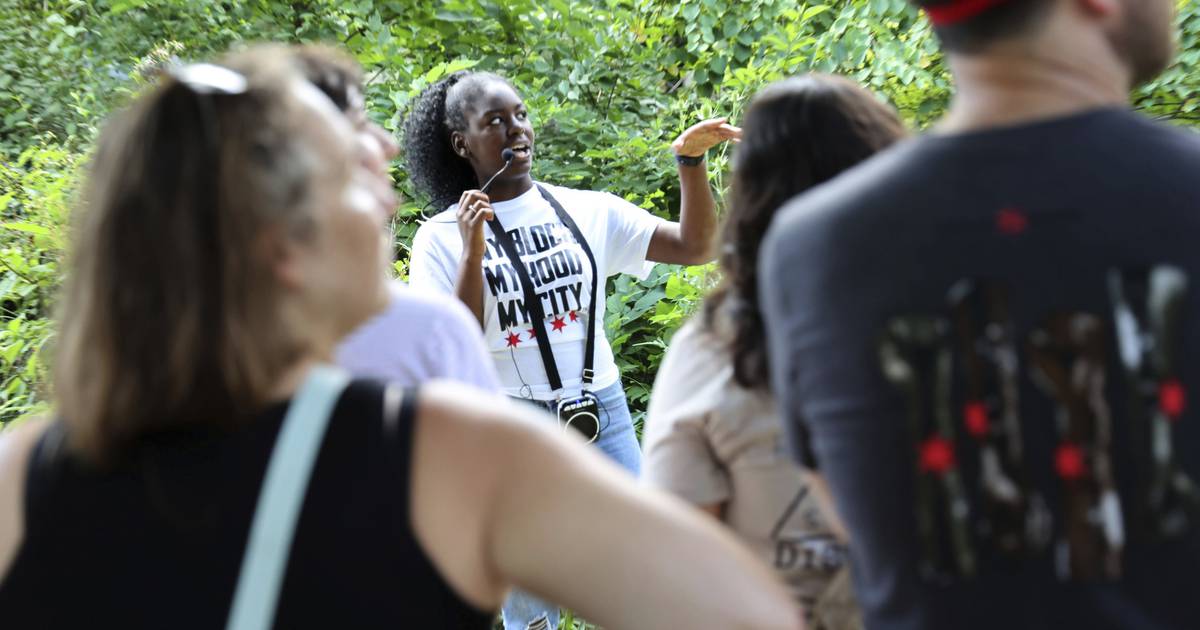 On Tuesday, nine high school and college students aged 14 to 18 gathered on the West Side at Collins Academy High School in Douglass Park to prepare for the next seven weeks.

It was a training day for teenagers who are part of My Block, My Hood, My City, an organization that encourages young people in Chicago to learn more about the city in which they live. For its fifth year, “M3” is bringing back its youth-led community walks program to help educate and entertain guests about the history of North Lawndale.

Ernesto Gonzalez, marketing director for My Block, My Hood, My City, said recruitment for the program begins at the start of the school year to attract high school freshmen for the following summer.

This is the first summer since 2019 that the program has been operating at full capacity, with up to 40 guests.

During the summers of 2020 and 2021, the program ran with limited capacity, with one to three guests per teen, according to Gonzalez.

But before putting on their walking shoes and speaking in front of people they’ve never met before, community walk leaders had to learn important skills such as voice projection, enunciation and speech. trust.

“This year is open for the whole city and tourists to do the community walk,” Gonzalez said. “People don’t usually go to North Lawndale, but North Lawndale has a lot to offer.”

Guests tour the streets where Dr. Martin Luther King Jr. lived and served while he was organizing in Chicago, and they learn about current organizations that continue the work at Stone Temple Church.

Chicago native Imani Muse returned from her freshman year at the University of Alabama at Tuscaloosa to intern at My Block, My Hood, My City and help teens with public speaking.

She led a group activity that had them all laughing while they did it.

One by one, the teenagers took turns standing in front of the class to read a tongue twister on a computer screen: “How much wood would a groundhog throw if a groundhog could throw wood?”

The next activity was even more difficult. Group leaders were asked to show up at a park just outside their school. They needed to be heard from a distance and over noises such as passing cars or conversations within earshot.

Akira Young, 15, said meeting new people and speaking in public are her favorite parts of the program.

“I was really scared to talk to people at first,” Young said. “But the more I talk to people, the less nervous I get and that’s something I look forward to.”

Young, who lives in Austin, said she was eager to learn more about the North Lawndale neighborhood.

“I didn’t know all that North Lawndale had to offer,” Young said. “I had never known this side of my city.”

It’s not all work, however. During the week, the group takes trips, such as going to a lasagna-making class.

In the summer of 2019, two of the teenagers traveled to Spain and lived with a host family for two weeks.

“So many lessons can come from these community walks,” Gonzalez said. “We try to plant the seeds in them and let them decide what to do with it.”

Private tours take place on Fridays and Saturdays. All proceeds are donated to the program to pay and support the young participants.

Free rides for community residents are available once a week with “Westside Wednesdays”.

“I always get nervous when I get a new group of people,” Young said. “But the nerves loosen up as I go along and at the end I breathe again and I’m happy to say I made it.”