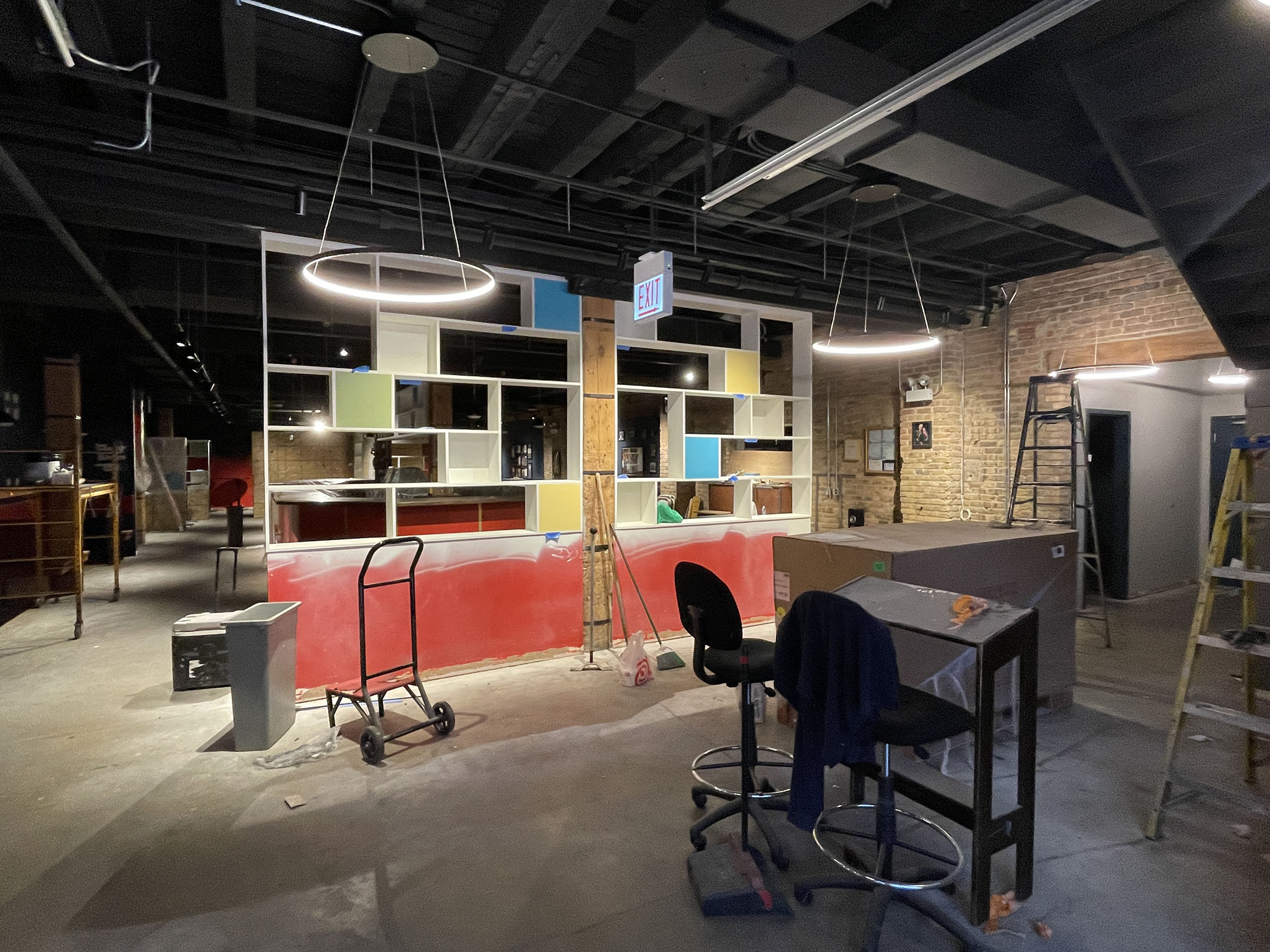 After the comedy revolution during the COVID-19 pandemic, when many artists started talking about the toxic culture in the sketch and improv world, iO was one of the many theaters that had to close its doors, apparently for good. Upright Citizens Brigade, which began life in Chicago, closed its longtime New York venue; they have also been accused of encouraging institutional racism. While many theaters have remained open, stalwarts like Second City have had to completely rethink their mission in favor of diversity and inclusion.

After real estate executives Scott Gendell and Larry Weiner bought the iO space in 2021, it needed such a makeover too. Jennifer Estlin and Mick Napier of Annoyance Theater stepped in to help guide iO into the future of comedy.

For Estlin and Napier, the most important step was to hire a core management staff. These new staff members are an integral part of the conversation, filling in the blanks about what’s happening with the new iO.

Under Charna Halpern’s leadership, iO faced allegations of institutional racism, which led to a BIPOC artists’ petition circulating ahead of Halpern’s summer 2020 decision to close the theater. There had also been earlier allegations that Halpern had not done enough to combat a culture of sexual harassment both in Chicago and in the now closed iO West. Halpern and iO weren’t the only ones facing such allegations; Former Second City owner, CEO and executive producer Andrew Alexander resigned in 2020 after black artists went public with their experiences there, and SketchFest founder Brian Posen resigned in 2018 from the festival and as executive director of Stage 773 in the following widespread allegations of sexual harassment. (This venue is reinventing itself as Whim, an “experiential theater” with cocktails.)

The familiar pattern is that theaters caught up in these controversies often hire “diversity consultants,” but, for those who’ve been following the scene for a while, it often feels like an endless trail of “wake-washing” in the hope to convince us. that these institutions are actually trying to do better.

That being said, a lot rests on the backs of iO’s new art directors, Katie Caussin and Adonis Holmes. Caussin has been on the improv scene for many years as a performer at iO, Second City and The Annoyance and knows the nuances and history of the community, their performers and producers. Holmes is newer to the scene but has been heavily involved in both Annoyance and iO. He is currently a Bob Curry Fellow at Second City (a program designed to foster diversity of talent, named after the first black member of Second City’s resident society).

Not all team members are new to iO. Managing director Steven Plock worked at the theater before it closed in 2020. Plock’s institutional knowledge means he is very familiar with how the business was run before, for better or worse. During the pandemic, Plock went out west and worked at a “cowboy bar,” so he’s surely up for arguing about whatever needs arguing. His experience in the restaurant business is an asset, as it is a major source of income for the for-profit theater.

The classes are also a big source of income, and Rachael Mason, known as one of Chicago’s top improvisers and instructors, will lead the classes as director of education. Mason will manage the entire class schedule. The online courses, taught by longtime veterans such as Susan Messing, have already been running for about three months.

When Estlin met Kim Whitfield, she was doing a show at Annoyance. Subsequently, Estlin hired her to direct a show that Annoyance was co-producing with Dispensary 33. Whitfield joins iO as executive producer, along with technical director Kyle Anderson and Jesse Swanson, executive director, special programs/content. Swanson was previously production manager at Second City and producer art director at Off-Color Comedy in Philadelphia.

“What a great thing if we can actually pull off an iO that has all the good stuff and gets rid of the bad stuff.”

It looks like staff diversity is a priority and will continue to be for the new iO. Racist tendencies die hard and have been known to kill theaters in the past in addition to alienating incredibly talented artists of color. What’s also clear is that the new staff brought together with input from Estlin and Napier all have deep roots in the improv and comedy scene.

In contrast, new owners Weiner and Gendell do not, although they excel in the “commercial” area of ​​running a business. The owning team now also includes Steve Sacks, who recently sold the family truck parts business and focused on iO. Sacks himself has a history with comedy, having performed stand-up in Chicago and New York. Of the three owners, Sacks will be the CEO of iO. He became the most involved on a day-to-day basis, now an office in the iO building in Kingsbury. When Sacks got involved, he read the petition that so many people had signed, and that was the driving force behind his involvement in the investment process. Sacks says, “What a great thing if we can actually pull off an iO that has all the good stuff and gets rid of the bad stuff.

As for exactly how Sacks and the team will combat years-old issues of discrimination, Sacks had this to say, “It’s not enough to put together a diversity, equity, inclusion team and Accessibility (DEIA) and say, ‘Yeah, we checked that box.’ We really want them to help us with the concrete steps needed to make performers and audience members feel safe. BIPOC artists didn’t feel comfortable, and we want to make sure they feel at home and that it’s a place where they can thrive.

Unlike the way iO operated, Sacks says, “We’re not doing what used to be done, which is having one person decide who comes on stage or who doesn’t. A person decides who is and who is not paid. Those decisions will be made collaboratively, and ownership will stay out of those decisions because we don’t want it to be a colonized management system. I think the DEIA is going to hold our future at bay. Mistakes will be made, but we will have to figure things out as we go. We do this in a spirit of collaboration and healing, a spirit of fairness. This is our goal.

When it comes to working with owners who are largely non-comedic, Estlin found collaborating with them to be quite refreshing, as they are the first to admit they know nothing about acting.

“They’re great people, and they’ve been super fun to work with, very supportive,” Estlin says. “It’s always amazing when someone says they don’t know anything about a subject. They’re like sponges, soaking up all the knowledge,” adding, “They put a lot of trust in Mick and me. It’s good when someone asks you for help and trusts the help you offer.

Renovations to the building are still ongoing and began about a month and a half ago under the direction of longtime Chicago set designer Bob Knuth, who has generally focused on making the bar feel warmer and more conducive to attendance by many people. Members of the public should expect to see a refreshed and lively space.

Renovations at iO are expected to be complete by the second week of September, when they will begin hiring support staff for accommodations, bartending and ticketing. Sacks says, “The property believes we can add value to the building’s renovation by creating a warm and relaxing atmosphere and allowing and facilitating our team to create hilarious shows. These creative decisions will be made in the most collaborative and fair way possible. While construction and permit delays are still part of the equation, iO is aiming to have a smooth opening in early fall, hoping to have an opening celebration closer to April. winter.

As for post-pandemic growth, Estlin says, “We have to constantly remind ourselves that the old is like that, and that’s what we’re doing moving forward. We want to make sure it’s a fair space that provides opportunities for as many types of people as possible. It’s super important to all of us.

Sacks and the team are committed to producing high quality comedy. “Shows should be funny. The quality must be very high, and we believe that there are enough talented and diverse BIPOC and para-ability comics out there. We want it to be funny; we want it to be edgy. We want it to be difficult! We want to be proud of what we’ve done and we all want to do something good for the community. If this can be a place of momentary joy and belonging, then we’ve done something about it. It’s an amazing and fun challenge for us. I can spend time with these talented people, it’s like a blessing. Our goal is to earn the trust of improvisers, work staff, and audience members who may not have felt safe or comfortable at iO. We will strive to create an atmosphere of support and inclusion, and we want people to hold us accountable for that. There has been a lot of trauma and we need to earn the trust of talented improvisers who would like to perform here.

It’s yet to be determined what iO’s place will be in this new comedy landscape, but given its long roots in Chicago, it’s a safe bet that expectations will be high. The theater has already started scheduling shows that will be ready to go in early fall. With the help of Estlin and Napier, and the business acumen of these new owners, iO appears to be on the road to repairing decades of damage. With so much to do about the necessary changes to its previous exclusive culture, audiences and artists alike are eager to see the future of iO.