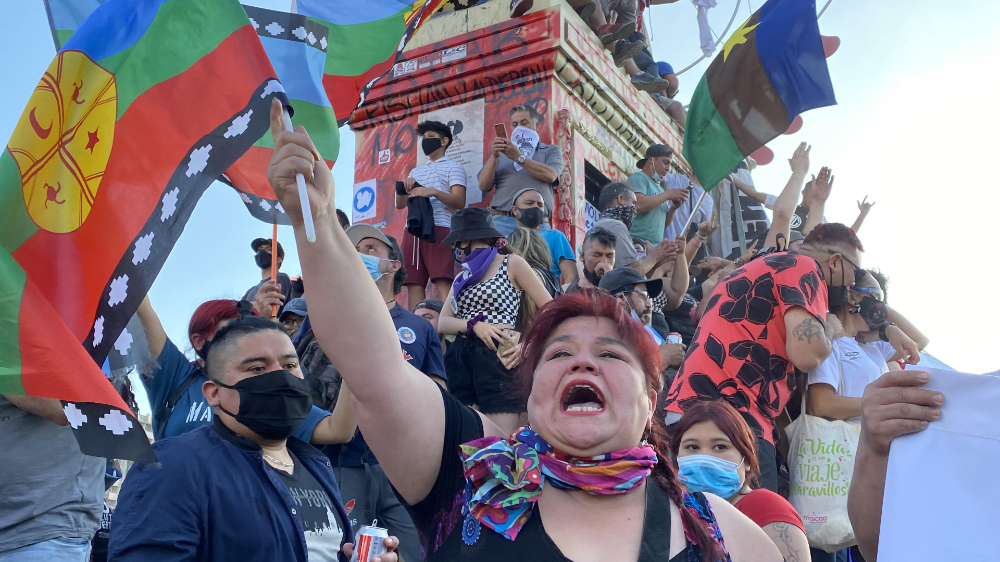 Aware of the still-fresh emotion stirred by monumental civil unrest, Chilean producer-directors Carola Fuentes and Rafael Valdeavellano take a bold look at the neoliberal structures that have seemingly divided and destroyed a nation’s prosperity.

With a focus on the uphill battle to achieve some semblance of peace amid a global pandemic, a country takes a historic and eager leap towards progress, a new constitution and a leader at the forefront.

“Breaking The Brick” dutifully follows the duo’s 2015 documentary feature “Chicago Boys,” which interviewed the writers responsible for drafting El Ladrillo, a neoliberal free-market economic model influenced by Milton Friedman and instituted by the Pinochet dictatorship. . Although touted as a miraculous way to bring prosperity to Chile, the system eventually drew criticism when the public saw soaring wealth disparities.

The film begins with a delicate but powerful metaphor that likens population to the cells of a caterpillar that must fight vehemently with the body around them to transform into thriving butterflies. The lines are read in a low voice as brutal scenes of uprising in the streets and police violence against protesters are shown on screen. The unsettling juxtaposition further serves to highlight the perceived urgency of the movement.

“Shortly before the social explosion, we had this story by Deepak Chopra, which collects the reflections of biologists and anthropologists, and compares the evolution of humanity to the processes of change in nature. They argue that in the midst of the drama of transformation there is always a group of cells, or people, who have the ability to imagine a better future, even if they don’t know it,” Fuentes says.

The documentary takes a close look at the harrowing life of activist and teacher Mariana and unlikely ally, businessman and one of the economists responsible for creating the stifling economic climate, Ramiro. Their differences slowly diminish as both strive for fairness for all. The filmmakers delve into the precarious ease of remaining ignorant of the suffering of others. Using a bold approach that allows for introspection rather than rage, neither vilifying, excusing, nor martyring, the subjects achieve a level playing field and justice.

“Over the years, we stopped seeing the world in black and white. We believe that media stereotypes that classify people as good and bad have prevented us from understanding the complexity of the social phenomena that have built our history,” says Valdeavellano.

He continues: “In our first film, ‘Chicago Boys’, we interviewed the creators of neoliberalism. In “Breaking the Brick”, where we see the long-term results of this economic model, we chose characters that would allow us to record and reflect the transformation that Chile has undergone since the social epidemic. Entrepreneurs are a big part of this process. Ramiro seemed to us very interesting: Linked to the writing of El Ladrillo, to success, and owner of a considerable fortune. He is a businessman who, in a moment of crisis and detachment, begins to take a critical look not only at his past life but also at that of his peers. Ramiro can be seen as part of the system that resists change, or as another imaginative cell that, from its own world, also pushes for a better future.

The film is both disturbing and uplifting as our subjects work tirelessly to use their various resources to help their communities, shedding light on the struggles of those living in poverty across the country.

“Milton Friedman taught us that ambition, consumption and competition would drive the free market. Judging by the long-term results, it didn’t work as expected. According to some thinkers, like the Chilean Humberto Maturana [1928-2021]it’s collaboration that allows us to progress,” notes Fuentes.

She continued: “All over the world, when communities face disaster, earthquake or pandemic, solidarity arises spontaneously. People with fewer resources experience the crisis every day, which is probably why they experience solidarity on a daily basis. But, as we see in the film, solidarity can also be a way to appease the conscience, for those who exercise it out of compassion. The challenge is perhaps to get out of this asymmetrical solidarity to move on to a more horizontal collaboration, which moves away from commiseration and translates into respect and interdependence beyond social classes.

Clips of the film will be shown at this year’s Hot Docs Fest in Toronto on May 1 as part of their Works-in-Progress screenings, which showcase segments of projects with cinematic potential in late production or post-production.

Produced by Chile’s La Ventana Cine, “Breaking The Brick” is the only Latin American film selected for the showcase, offering the enormous opportunity to connect this touching, relatable and unprecedented event to a global audience.

“In much of the world, we are rethinking what we mean by development. For decades, we have associated it with economic growth. Chile showed that one goal was not enough. Our GDP has increased but the average has hidden inequalities and the concentration of wealth. Our exports have increased but we have degraded our nature. We have improved our economic indicators, but mental illness and debt have skyrocketed,” laughs Valdeavellano.

He concludes: “In October 2019, the mirage was shattered and although the model was violently defended, just as it was imposed during the dictatorship, today Chileans have the opportunity to imagine a new paradigm. In Chile, there are thousands of people – or cells – with imagination working for this, with cutting-edge ideas like the circular economy or green energy. For half a century we have allowed the dominance of economics to become a threat to people’s well-being and dignity, today we can correct that trajectory.

Hicks selected by Chicago in the NFL Draft